A great leap forward from Cisco’s 1700 Series routers, the 1841 router increased performance by a factor of five. It can support over 30 WAN interfaces, as well as multiflex trunk cards. 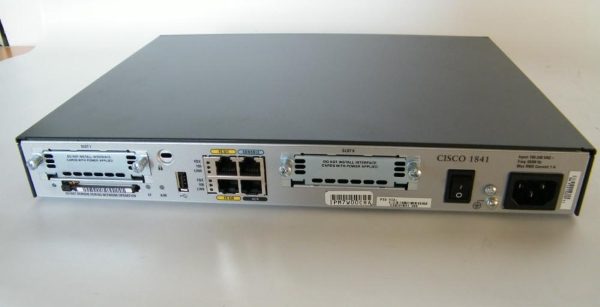 The router enhances VPN performance by using an acceleration module, which is an optional buyers can add on. It provides plenty of slots and performance capability for users who want to expand their network. A real-time clock is integrated into the device itself.

The Cisco 1841 is a modular platform that supports both T1 and E1 wire speeds. It supports more than 90 modules and contains two 10/100 integrated fast Ethernet ports. It has an optional 4-port Ethernet switch that expands its capacity to 15 VLANs.

Supported by a Cisco IOS firewall, the Cisco 1841 has many security features lacking in its competitors. It offers on-board encryption. With help from the AIM module, the device supports more than 800 VPN tunnels. Antivirus defense is provided via the Network Admission Control. It provides embedded encryption that is based in the hardware itself. The encryption is enabled by an image from Cisco’s IOS software security.

The router provides small and medium-sized businesses with an efficient, secure solution to route online traffic. The Cisco 1841, like the rest of Cisco’s 1800 Series, provides a secure way to transmit various kinds of data, including video and voice. It has 256 MB SDRAM memory and 64 MB Flash, which allows users to deploy services concurrently.

It is available on Amazon.com and other online retailers for a fraction of its original price tag, which was around $1300, since the router is longer manufactured. Cisco will end its support of the router in October 2016. It has been replaced by the Cisco 1921 Modular Router.